See one of the more charming sides of Greenland, South Greenland. A big part of South Greenland was recently accepted on the list of UNESCO World Heritage Sites, which presents a unique history of farming in the Arctic that begins with Norse settlement in Greenland in the 900s. On this package, you’ll have a great opportunity to see 3 of the UNESCO sites: Hvalsey, where you can see the best preserved Norse church - Igaliku, which is a beautiful family friendly sheep farmer village - and Qassiarsuk, which is an ideal area to hike.

You will also be staying in Qaqortoq which is the biggest city in South Greenland. Qaqortoq is full of life with traditions, culture, and history and the city is decorated with the permanent art exhibition “Stone and Man” consisting of more than 30 sculptures all over town. The artworks were created by 18 Nordic artists, and the artworks were made directly from the cliffs and bedrocks, permanent indeed! While here you can visit Great Greenland, which is a place where sealskin is made into fine mittens or bags for men and women. In the center of the town you’ll find the one and only fountain in the whole country, right nearby the local museum which has an exciting collection of tupilaks original kayaks and other things.

During this 5 day trip, you’ll get to experience the charming southern part of Greenland. Once you've landed in Narsarsuaq you’ll be sailing to Qaqortoq (2 hours), amongst icebergs and possibly even whales and seals. The day after you’ve arrived in Qaqortoq you’ll get to see the first of the UNESCO sites, the church ruin in Hvalsey.  Your exploration has just begun and over the next few days you’ll be out and discovering more Norse ruins in the prettiest landscapes, including a tour to the famous Qooroq Icefjord.

We’ve made a unique itinerary just for you so go ahead and check out your opportunity for this by pressing ‘Book Now’ above. 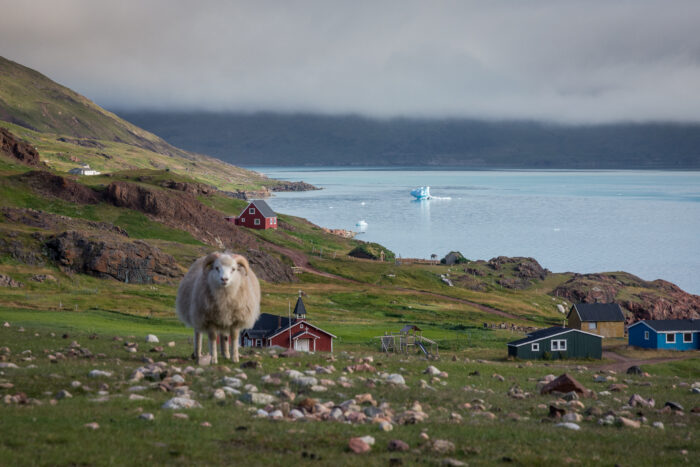 Arrival in Narsarsuaq & hiking to Igaliku

Upon arrival in Narsarsuaq, you’ll be picked up and driven to the harbor.

You will start your half-day adventure to the oldest Norse farm, Qassiarsuk, where the outlaw, Eric the Red built his farm (which he named Brattahlid) when he settled in Greenland as the first Norseman.

You’ll find a open-air-museum of the well-preserved farm (admission fee not included), Brattahlid. There are about 40 inhabitants in Qassiarsuk and is right on the opposite side of the fjord to Narsarsuaq. The village is well known for its annual marathon named: Leif den Lykkelige (Leif the happy) Marathon, which also is also a well-known name from the Norsemen.

After your trip to Qassiarsuk, you will be transferred by boat and sail to Itilleq, where you’re going hiking on “Kings Road”, it’s about 4 km to one of the most beautiful sheep farming villages of Greenland, Igaliku. It is an easy walk on the gravel road, your luggage will be transferred for you by car so you just need your backpack with water, an extra layer of clothes and a camera!

The village is right on the opposite side of the iconic Illerfissalik mountain and is more or less surrounded by mountains, which makes this area a bit warmer in the summer - that’s why it has the name Igaliku which means “the place like a pot” in Greenlandic.

You can go on two wonderful day hikes:

Lake and Plateau hike- it is one of the most popular day hikes. It is 17km hike where you go to the viewpoint over the Tunulliarfik fjord and Qooroq glacier.

The waterfall hike - it is another 17 km hike across some sheep farms to the river and waterfalls. 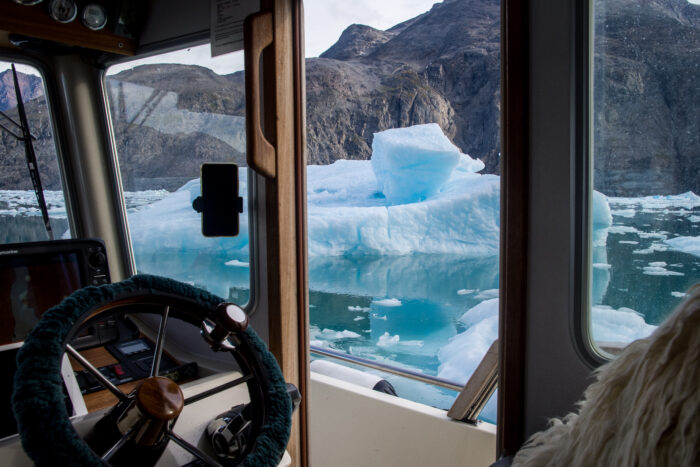 After breakfast, we will pack the bags and head to new adventures!

In the beginning, we will go on a 2-hour Qooqqut fjord tour among the icebergs. You will enjoy amazing views of the Qooqqut ice fjord. This two hours tour will let us sail as close as possible to the glacier and get a perfect shot! You will have time to be outside and enjoy a hot drink.

After the tour, we will head to the biggest city in South Greenland- Qaqortoq. You will spend the last two nights here.

Today you’ll be heading on a boat trip to Hvalsey from Qaqortoq, it only takes about 30 min.

For you to arrive at your first UNESCO site. The Hvalsey church ruin is 6 meters tall and is the most well-preserved Norse church in Greenland. Hvalsey is called Qaqortukulooq in Greenlandic, which means “the big white” or “the very white one” because the church was painted white when it was in use. When you’ve learned more about the story of the church you’ll have time to walk around in the silence and beauty of nature.

When you’ve sailed back to Qaqortoq there’s time for a walk, you could go see the fish/meat market, where the fishermen and hunters sell their catch of the day. The market is in the center, where there are cafées and the fountain. If you have the time, you can go for a walk to see the “Stone and Man” sculptures all over town.

Transfer back to Narsarsuaq and departure

It is your last day in Greenland. After breakfast, we will head down to the harbor and you will sail back to Narsarsuaq, where you can enjoy a cup of coffee or take a quick visit at the local museum of Narsarsuaq before your departure.

Our customers are the foundation of Guide to Greenland so we make great efforts to provide you with the best possible service.
We are located in Greenland and cooperate with everyone involved in the Greenlandic tourism industry. We are therefore perfectly placed to quickly react to changes or new wishes you may have to ensure you have the trip of a lifetime.

BOOK EARLY
The earlier you book your trip, the better the prices will be, and the more likely you will be able to book the tour you want for the dates/times you want.

Package tours can be sold out more than half a year in advance (note that Guide to Greenland does not include international flights in packages, except where indicated from Iceland or Denmark). Day trips may sell out closer to your arrival date, but for popular destinations, certain dates/times can also sell out months in advance. We recommend that you secure all of your experiences by booking them well in advance of your trip.

CANCELLATIONS
All cancellations must be made via e-mail.

Although Guide to Greenland is committed to ensuring the best protection and service for our customers in the event of a cancellation, we are obliged to charge cancellation fees. This is in accordance with Greenland travel industry business practices. Details can be found in our general cancellation policy

There are no reviews yet.