The Northern Lights (Aurora Borealis) are the shimmering curtains of predominantly green light that brighten Instagram feeds every northern hemisphere winter.  They are nature’s winter light show that is screened against a backdrop of stars and only available at open-air theatres at certain latitudes. Greenland offers you front-row seats to one of the most magical spectacles you will ever see.

What are the Northern Lights really?

Our Sun constantly sends out a stream of charged particles in every direction in the form of the Solar Wind. When those charged particles that are directed towards Earth reach the protective magnetic field that surrounds our planet, they spiral in and interact with molecules in the atmosphere – exciting them with a temporary boost of energy. When these molecules drop back down to their normal state, they release this energy in the form of light – the Aurorae.

This process becomes more extreme (and the Northern Lights are much stronger) when the Sun is more active with sunspots, solar flares and even bigger releases of particles called Coronal Mass Ejections.  Although this follows an 11 year activity cycle and the last maximum occurred in 2013, don’t worry!  The Sun is always active and the lights are still very visible and an unbelievable sight even under normal circumstances.

Why are the Northern Lights Green?

While green is by far the most common color, aurora can also range from red through to purple. The color depends on which molecule in the atmosphere is releasing the extra energy and also its altitude.

Blue = Nitrogen at less than 100km

The reason that green is the most common is because it is at these altitudes that most of the charged particles from the Sun interact with the atmosphere. Also our eyes are most sensitive to light emitted at these color wavelengths.

What is the best time to see the Northern Lights?

Given their source of origin, the Northern Lights occur all year round.  However, they are easily overpowered by the light from the Sun, and their strength depends on the strength of the interaction between the charged solar particles and the molecules in the Earth’s atmosphere.

For these reasons, you have the best chance of seeing the lights during the darker, winter months (September through to early-April in the Northern Hemisphere), and when the Sun is very active. Even then, there is still no guarantee they will play across the sky, but packing your winter woolies will give you the best chance to see them.

Another thing to consider is the phase of the Moon.  While a full moon will help illuminate foreground objects for photography, if you just want to experience the Northern Lights and not worry about your camera too much, it is much better to do so without the Moon.  In other words, you want to time your visit to be within a week of the New Moon – preferably the week before if you want to go to bed early-ish. You can easily check for the date of the Full Moon in Nuuk (and other places) here.

One final complication is the weather.  Even though it feels like you can reach out and touch them, the Northern Lights usually occur at an altitude of more than 80km – well above any clouds that might be around.  You will need clear or semi-clear nights to be able to see them.

Where can I experience the Northern Lights?

The Northern Lights actually occur in an “auroral oval” – a ring that takes in the northern-most parts of Canada, Alaska, Russia and Scandinavia, as well as Iceland and Southern Greenland. There is a similar auroral oval formed in the Southern Hemisphere which results in the Aurora Australis.

Note that the auroral oval is a band passing through these countries, so be careful to not go too far north or you will miss it entirely!

Why is Greenland the best place to see the Northern Lights?

Although there are plenty of different places from which to enjoy the Northern Lights, we think that Greenland is the best.  Here’s why:

1) With its tiny population and small towns, Greenland has minimal light pollution.  This means that you can see the Northern Lights from wherever you are, even if you are downtown in its capital, Nuuk! Obviously, you will get a better view if you head out of town slightly, but it doesn’t take much to find a very dark place from which to enjoy the show.

2) With more than 300 clear nights per year, Kangerlussuaq offers one of the best chances across the entire Arctic to witness the Northern Lights.

3) If luck is not on your side and for some reason you do not get to see the Northern Lights, Greenland has plenty more to offer during the winter. Some say that winter is actually the best time to visit, when the country’s staggering natural beauty is enhanced by the pristine snow that covers the landscape.

Depending on where you are in the country, get the most out of your trip by filling your days with dog sledding, snowshoeing, skiing, and snowmobiling. Explore Guide to Greenland for the most comprehensive list of day-tour and extended package options in the country.

Where is the best place in Greenland to see the Northern Lights?

It is possible to see the Northern Lights from Nanortalik in the South, to Ittoqqortoormiit in the East, and Ilulissat (and even Uummannaq) in the North.  It doesn’t really matter where you are in Greenland (except the far north, which is outside of the auroral oval), your Northern Lights experience will be exceptional.

However, if we had to choose our Top 3 locations, they would be:

If you are coming from Copenhagen, this is where you will first land in Greenland.  With its stable climate (the reason the international airport is located in this small town rather than in the capital) and 300 clear nights per year, it gives you one of the best chances of seeing the Northern Lights, especially if you are short on time.  In fact, a research station to study the polar upper atmosphere (including the Northern Lights) is located only 15km away at Kelly Ville and has been in operation for more than 30 years!

Although the lights are readily visible from within the town, it is always better to head out on a northern lights tour to eliminate as much light pollution as possible.  And don’t forget to visit the immense Greenland Icesheet or the impressive Russell Glacier while you are in Kangerlussuaq.

Imagine sitting on a cliff with enormous icebergs below and the sky dancing with light above. Ilulissat is the home of the famous UNESCO World Heritage Listed Icefjord where icebergs the size of skyscrapers are not uncommon.  During the winter, it is a surreal landscape in which to view the Northern Lights.

Head out of town on snowshoes, snowmobile or on a drive to experience the Aurora Borealis in all their glory, and make the most of your days by exploring this incredibly beautiful area on a dogsled, snowshoe or snowmobile excursion.

Believe it or not, Greenland’s largest city, Nuuk, also makes our list of where to see the Northern Lights. And there aren’t too many capital cities with that claim to fame! Explore Greenlandic culture and the world’s second-largest fjord system by day, and see nature’s light show at night on a tour to the darkest areas on the outskirts of town or from the fjord. If the sky is glowing over the iconic Sermitsiaq mountain (in particular) it is an incredible view.

Where can I get current information about the Northern Lights?

One of the best apps for staying up to date with what is happening with the Northern Lights is Northern Light Aurora Forecast (iOS/Android).

The most important information is:

You will need to be connected to the internet or mobile data to access the current forecast, but you can see what the prediction is for days ahead under “Long fcst” (Note: extended forecasts are paid functions).

A website that offers the same information in a relatively easy to interpret manner is Aurora Service Europe.

And don’t forget the weather on Earth!  You aren’t going to see any Northern Lights if it is cloudy!

​Our recommendation is Yr.no from the Norwegian Meteorological Institute and can be accessed as either an app (iOS / Android) or a website. Most of the main towns of Greenland have their own entry (the weather varies considerably across the enormous island), and the information can be viewed as an immediate summary or as a several-day forecast.

What should I pack when planning a Northern Lights trip?

Given that the best time to see the Northern Lights is during Winter, and that this time of year tends to be pretty cold in Greenland, it is important to pack carefully so that you can fully enjoy your experience.

As always, layers are the key. Especially if you are snowshoeing out to your Northern Lights viewing location. The colder the weather, the more layers you are going to need. If anything, we suggest overdressing because you can always remove layers.

Read our full article on the best clothing to pack for a trip to arctic Greenland, or watch the video version for Winter here.

If you are snowshoeing to your Northern Lights viewing point, you will probably want to take off the mid-layer while moving, but quickly put it back on again as soon as you reach your destination.

For snowmobiling, many tour operators provide a heavy winter jacket and pants to keep you warm while on the back of the machine – but make sure you double-check with them what is included in each tour.

Are you ready to see nature’s brilliant light show in one of the most impressive places on Earth? Follow our 4 step plan:

The Ultimate Travel Guide to Maniitsoq 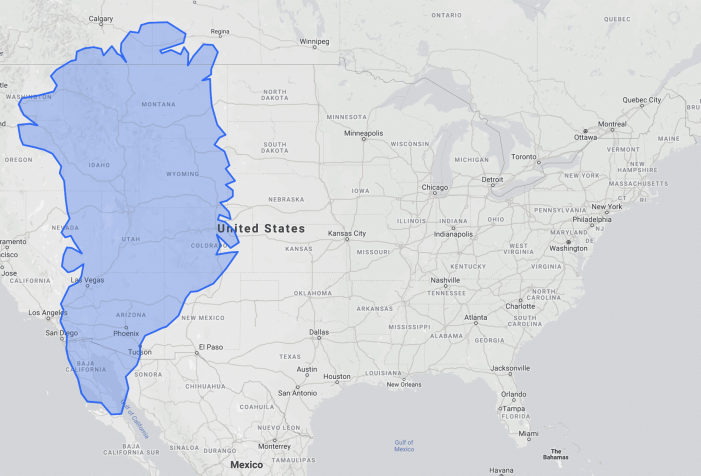 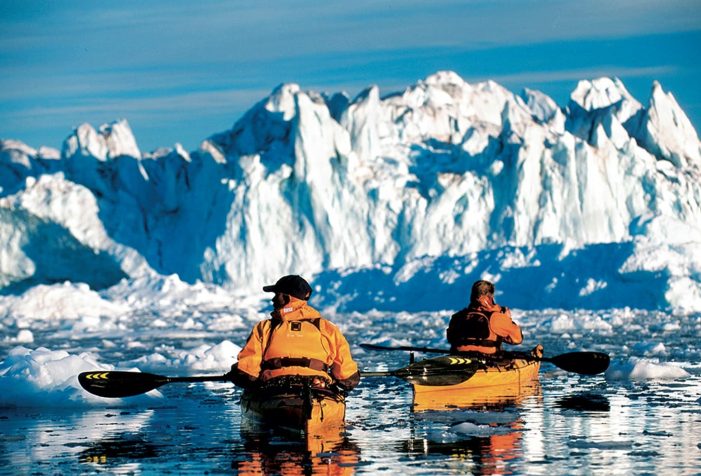 Why You should forget Greenland 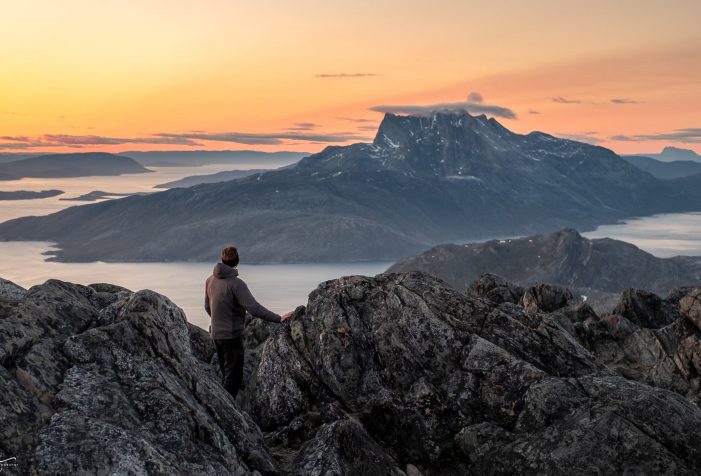